On our mommy & Watts days, he often suggests activities. His typical request being, “Wanna play Legos wit me?”.

The two things Watts loves best are Legos & running. After every dinner he announces, “Wanna see how fast I am?” and then runs up & down the hallway. The smile that spreads across his face reminds me of the famous “Chariots of Fire” line:

I believe God made me for a purpose, but he also made me fast. And when I run I feel His pleasure.

When we arrived at our running spot, he let me know we would start running once we got to the sidewalk that looped around the park. With our toes lined up with a crack in the concrete, I asked if it was a race or we were running together. He answered, “Bof. Weddy, get set, go!!”

We took off and almost instantly his smile appeared. Then he reached out with his sweet left hand and grabbed mine. And we ran . . .for about 200 feet before the 90 degree forced us to stop and turn around.

But choosing to say “yes” and drive to the park was 100% worth it, for the memory of running while holding his hand.

Because the next day I held that exact hand again. . . . this time to keep his arm still while he screamed and the x-ray machine took an image of his broken bones.

You see Wednesday of this week we decided to go to a park before church. I had just finished listening to Quade read for school. He jumped up to join his brothers. I stayed on the bench, watching from afar, thinking about an earlier conversation with a friend.

When I saw Knox wander over to a nearby soccer practice (and knowing his love for balls of any size, shape or color), I knew an intervention would be in order. So stood up and walked towards him. That’s when I heard the fall next to the slide and Watts’ screams.

I turned to see him lying on the wood chips, crying out and his left arm limp.

(Moms, this is where you remind your kids a phrase I’ve said a thousand times, “Go up the stairs, down the slide.” And also, “Obedience can bring blessing. Disobedience can bring pain.” Okay, back to the story).

By God’s grace, right before going to the park we had stopped at Walgreens to buy some chewable Ibuprofen for Quade’s headaches. The first thing I did after comforting Watts, was give him some pain medicine.

(Knox’s first thing was to kiss his brother on the head).

And by God’s grace, a mom standing nearby was kind enough to give us an ice pack.

I called Bruce immediately and, by God’s grace, Bruce was already in his car about to go to a work dinner.

The next step was to get all the boys in the car. So I scooped Watts into my arms while Quade & Price attempted to convince Knox to leave the playground (a challenging task).

Once everyone was settled in the car I took a deep breath and stuck the key in the ignition, turning it over to hear a “click” and no engine response, only a flashing battery sign on my dash.

The big boys and I started saying prayers out loud, asking for God to make a way out and to fix the broken car.

When I tried to start it two more times and it wouldn’t Price said, “Why isn’t God fixing it? We prayed. Is He trying to teach us something?”

Yes, yes He was. He was already teaching me.

Bad things happen and sometimes bad things happen all at once. But it’s amazing how God gave me eyes to see His grace right in the midst of the hard and walk in it. Feeling like I was surrounded by His giant grace bubble walking through these challenges.

By God’s grace I thought to call a couple of friends who were on their way to church. My dear friend Kris picked up the two big boys & joined with me in the shock of how was all this possible and promised to pray (I’m just remembering now, she is my ‘bump into grace’ friend).

Within a few seconds another dear friend, Amber, pulled up and offered to take Knox, but we realized it be best for him to just stay with Bruce and go to bed early. She told me she had already been praying.

Bruce arrived and we swapped places. I drove off with Watts. And Bruce and Knox stayed with the Suburban waiting on AAA (and Knox got more time at the park. . .grace for him).

By God’s grace, a new independent ER just opened up a month ago a few minutes from where we were. After grabbing a fruit punch juice box from their stocked mini-fridge, we walked right in to an examine room.

I laid Watts down on the bed and he started shaking, his bottom lip popped out and the tears started coming.

By God’s grace the nurse who was in there brought him back a heated blanket. Dr. Bob informed Watts right away that we were in the “no shots room” (whew).

By God’s grace the x-rays showed fractures across his radius and ulna, just below the wrist, with no surgery required.

With Watts’ additional pain medicine kicking in and help from the T.V. show, “Sheriff Callie” (a cat cowboy? really?), the doc placed a fiberglass splint around Watts’ arm and not one tear shed. 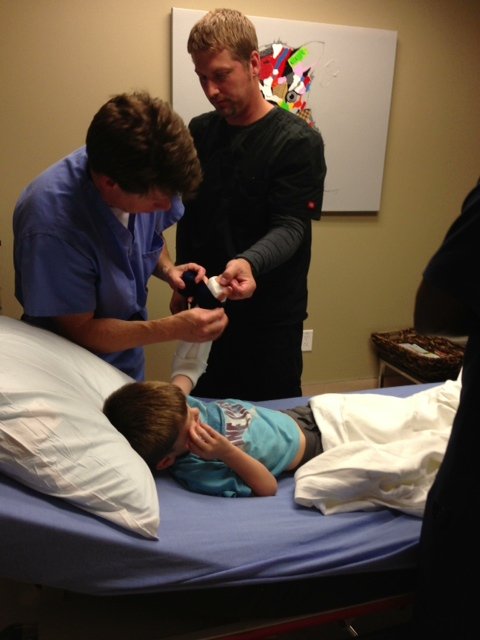 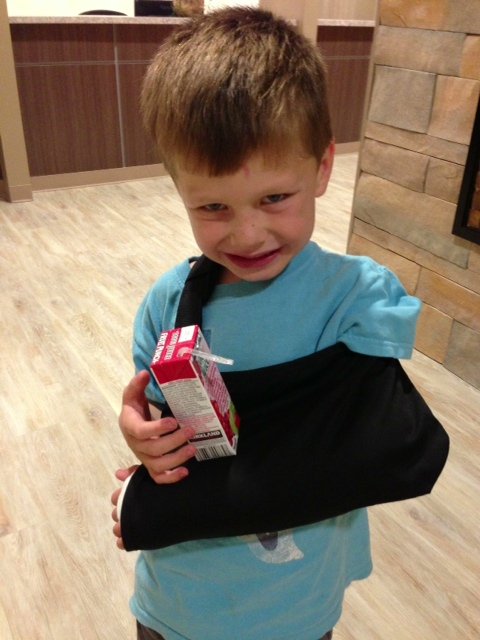 With the sling in place, as we walked out Watts informed me his broken arm made a good table for his juice box. Grace.

We often see broken as bad, reminding ourselves how we live in a “broken world”.

But the first “boy broken bone” is reminding me broken can be for good. 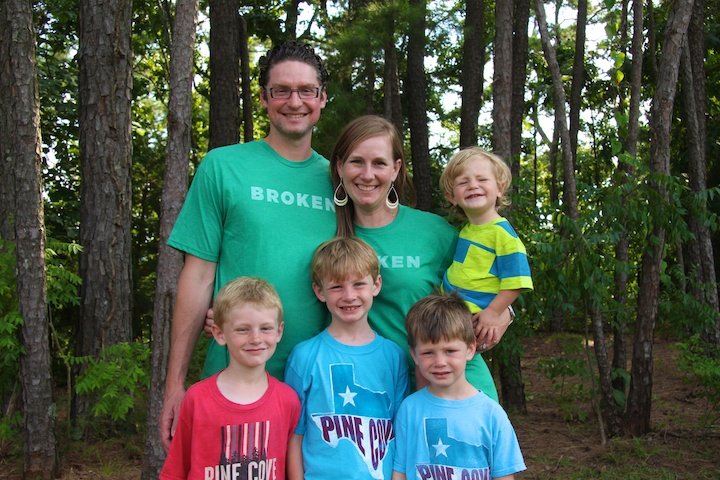 This past Tuesday while running with Watts I wore my green family camp t-shirt, with the word “broken” in white letters across the front. And this verse on the back:

Sow for yourselves righteousness; reap steadfast love; break up your fallow ground, for it is the time to seek the LORD, that he may come and rain righteousness upon you. Hosea 10:12

In the parable of the sower there are 4 types of soil. Good fruit cannot grow in hard, packed down dirt (aka, “fallow ground”).

The verse above reminds us, in order for God to work in our hearts and grow good fruit, sometimes we need brokenness. A stirring up of the soil. For love, joy, peace, patience, kindness, goodness and gentleness to grow.

What ever hard things you walk through today, this weekend, next month, this year, find His grace and walk in it.

In your giant grace bubble.

What grace have you found in broken places?

*Ironic my Monday post started with: “God never promised a life without pain. He promised to walk with us through it.”