Given the response to “The LEGO Movie Discussion Guide”, I’m thinking I’ll just keep going with the movie discussion guides.

For me, it’s super fun to talk about movies. If I can help families not just absorb entertainment but have meaningful discussions, then it’s a win-win.

Since last week we saw the new film, “Mr. Peabody & Sherman” let’s chat about it, shall we? 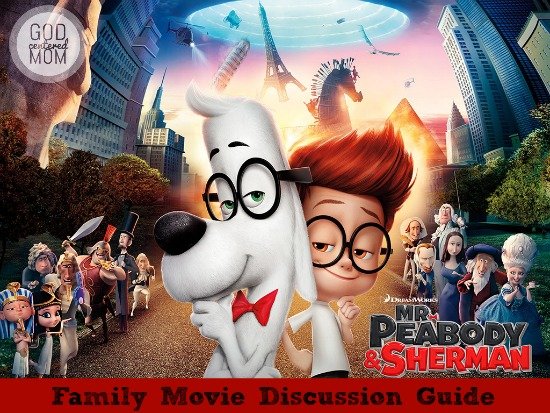 Mr. Peabody is a business titan, inventor, scientist, gourmand, two-time Olympic medalist and genius…who also happens to be a dog. Using his most ingenious invention, the WABAC machine, Mr. Peabody and his adopted boy Sherman hurtle back in time to experience world-changing events first-hand and interact with some of the greatest characters of all time. But when Sherman breaks the rules of time travel, our two heroes find themselves in a race to repair history and save the future, while Mr. Peabody may face his biggest challenge yet – being a parent. –IMDB summary

I didn’t see “Mr. Peabody & Sherman” as the traditional potty humor movie, like an “Alvin & the Chipmunks” or “Smurfs”.  You know, the kind of movie where you feel dumber afterward.

That being said, it wasn’t devoid of “poop” and “booby” trap jokes. Because King Tut does rhyme with “butt”. (not condoning, just stating the facts…).

There was definitely the “adults only” humor, that went over my boys’ heads. For example, Mr. Peabody made a cocktail and called it “Einstein on the Beach”. Or at the end of the movie when talking about pardoning Mr. Peabody, President Clinton chimes in and says, “I’ve done worse” (yep).

The only part of the movie that scared my boys is when the characters time travelled to ancient Egypt. Penny became engaged to King Tut. She learned that if he died (which history tells us happens at a young age), then they would kill her too…by ripping out her organs. Ummmm…

When tucking my boys in bed they voiced concern. Would they really cut out her organs? Why would they do that?

I directed their attention to how the Egyptians thought they were doing the right thing. And we talked about how when Moses wrote the first 5 books of the Bible he was combatting an Egyptian culture where such rituals were taking place. (from mummification techniques to Biblical authorship…twenty points for this mama.)

Here are a few discussion questions you can use, organized by five prominent themes found in the movie:

Since we have immediate family members who have been adopted, this topic has been thoroughly discussed in our home. But after watching this movie, if you haven’t talked about adoption…do it!

You can even take the conversation to the spiritual level and share how we are God’s adopted sons & daughters.

For he chose us in him before the creation of the world to be holy and blameless in his sight. In love he predestined us for adoption to sonship through Jesus Christ, in accordance with his pleasure and will. (Ephesians 1:4-5)

This (sadly) has been a topic in our home over the last year. I was thankful to see it addressed. To showcase how ugly it looks to be the bully, how you can correctly/incorrectly respond and how understanding one another can repair broken relationships.

A few questions to discuss: What caused Penny to bully Sherman? Was Sherman’s response (biting) the right one? Do we return evil for evil? (1 Peter 3:9 & Romans 12:17-21) or do we walk away? If we walk away and the bullying escalates, then is it okay to attack back?

I love how Mr. Peabody handled the situation. He decided to invite Penny and her parents over for dinner. Isn’t it true that sometimes getting to really know a person makes it hard to bully them?

Every great relationship starts from a point of conflict and grows from there. -Mr. Peabody

A huge theme in this movie is learning from history. I think the time travel scenes provided the best material for our conversations.

During bath time that night we talked about the French Revolution, Marie Antoinette, Egyptian rituals (like I mentioned), and the Trojan War. Definitely check out Wikipedia so you are prepared to answer questions!

To get the discussion going you could ask, “Which time period shown in the movie was your favorite?” or  “Which period in time would you travel?”

When we walked out of the movie, my four-year-old refused to put on his coat. Not a huge deal except it was 30 degrees outside and we were supposed to leave on a trip the next day. The last thing I needed was a sick child on an airplane. Fortunately, on the car ride home we were able to use the movie characters as a way to emphasize the need to obey our parents.

In the movie, Sherman is an obedient boy until Penny questions why he obeys everything his father tells him to do. Sherman begins to rebel and in one scene his disobedience leads to Mr. Peabody falling off a cliff.

“Why is it important to obey your parents?” (my answer is usually…because your parents love you and want you to have the best life. God promises things will go well with you if you honor your parents).

5. Believing in your children

In one scene Mr. Peabody tells Leonardo DaVinci how wonderful it is to see an elegant equation translate into beautiful engineering. Then he bemoans the fact children can’t be more like that. To which DaVinci says, “children aren’t machines.”

Having four different boys, I can’t treat them all the same because they aren’t machines. They have different gifts, emotions, and dreams.

In another scene Penny tricks Sherman into flying Da Vinci’s airplane. When Mr. Peabody sees him flying (and doing a great job), he criticizes Sherman and exclaims, “You don’t know how to fly!” To which Sherman loses all confidence and questions, “I don’t?” (even though he has for the previous 30 minutes) and the plane ends up crashing.

Fathers, do not provoke your children to anger by the way you treat them. Rather, bring them up with the discipline and instruction that comes from the Lord. (Ephesians 6:4)

After your discussion about obedience, you could talk about the importance of parents encouraging their children. The relationship between you and your children is a balance of honoring one another (treating each other special).

Maybe you could be bold enough to ask them, “What could I do/say to let you know I believe in you?” or “How could I best encourage you?”

Have you seen this movie? What topics did your family discuss?

To read another article on “Mr. Peabody & Sherman”–> Christianity Today