When parenting feels more like a battle than a huddle…

Miraculously dinner was in the oven, where it would stay for the next 25 minutes.

With a little time on my hands I thought I’d be generous and give my  “love language of quality time” son some one-on-one attention.

Yes. I’m busy but there are a couple other reasons I haven’t been playing. For one,  I don’t quite know how to play with big boys…I’ll sit and help build a Lego kit or play a game. But battles with light sabers doesn’t quite float my boat. The other part of me thinks they are old enough to need lots of free play without mom–to be creative, negotiating arguments, exploring, etc. And I don’t want to cramp their style.)

On this night, from the kitchen I yelled out, “Hey Price! Come here. Do you want to play a game with me?” But instead of a “Sure!” or “Yeah!” He quickly replied, “Nope. I don’t want to.”

I stood stunned. Had we already reached the parent rejection age? At 6? Is this really the moment he no longer needs me? (ridiculous thought, I know. Fortunately, Ann, with her oldest headed off to college says I’ll never stop being needed).

Even though I should have just moved on, I couldn’t. His words stung. I’d been under the assumption that the reason we hadn’t played together was because of my busyness, not because of his lack of interest.  Whoa.

I sulked for the rest of the evening and maybe even threw a guilt trip in Price’s direction. As I gave him goodnight kisses and prayers, he looked me in the eye and said,

Mommy, I’m sorry I hurt your feelings. I didn’t know you wanted to play with me. I thought I was in trouble.

That statement should have made me feel better, right? It wasn’t that he didn’t want to play with me...he just thought I was yelling at him…

I’d sensed that our days were full of more correction than encouragement. I had become tired of the potty talk and fighting and harsh words. But I didn’t know how to fix things other than constantly remind them and give out consequences.

The fact my son thought he was in trouble when I asked him to play? Not good.

A couple days later I got a new book in the mail. I already love lots of books written by this author’s wife, but hadn’t read any of his. From what I’ve read so far in this book, I’m a new super fan of Clay Clarkson (husband of Sally Clarkson) and his book “Heartfelt Discipline: Following God’s Path of Life to the Heart of your Child” (click on the book image below to be taken to Amazon…affiliate link).

When a book changes your insides and effects your “living out”only after a few chapters…that’s a good book.

Here’s the one long quote from his book, “Heartfelt Discipline”:

While there is nothing inherently wrong with negative discipline, such as punishment, the real issue is the parents’ attitude toward their child.  If parents are primarily looking out for sin, they can too easily view their child as an adversary who is trying to get away with bad words and behaviors.  This perspective puts parents in the role of sin police, watching for and punishing violations of the law.  You’ve seen these kinds of parents before—strict, controlling, demanding, and alert to their child’s every move. It’s difficult, if not impossible, to cultivate a truly heart-to-heart relationship under those conditions.–Clay Clarkson

Given my high sense of justice (read more on that here) and my preference for individual sports vs team sports, it makes sense that I struggle being my child’s advocate and instead become an adversary or the “sin police”.

For the few days after reading this section I struggled with working towards advocacy. Should I never correct them when they make a mistake?

I thought I am supposed to be training and helping them learn how to behave. Right?

But I was using that as an excuse to continue my police role. Clay gives great imagery of discipline in his book–keeping your children on the path of life. When they make mistakes or sin gently guide them back to the path. Isn’t that what I’d written about in my “horse post”? 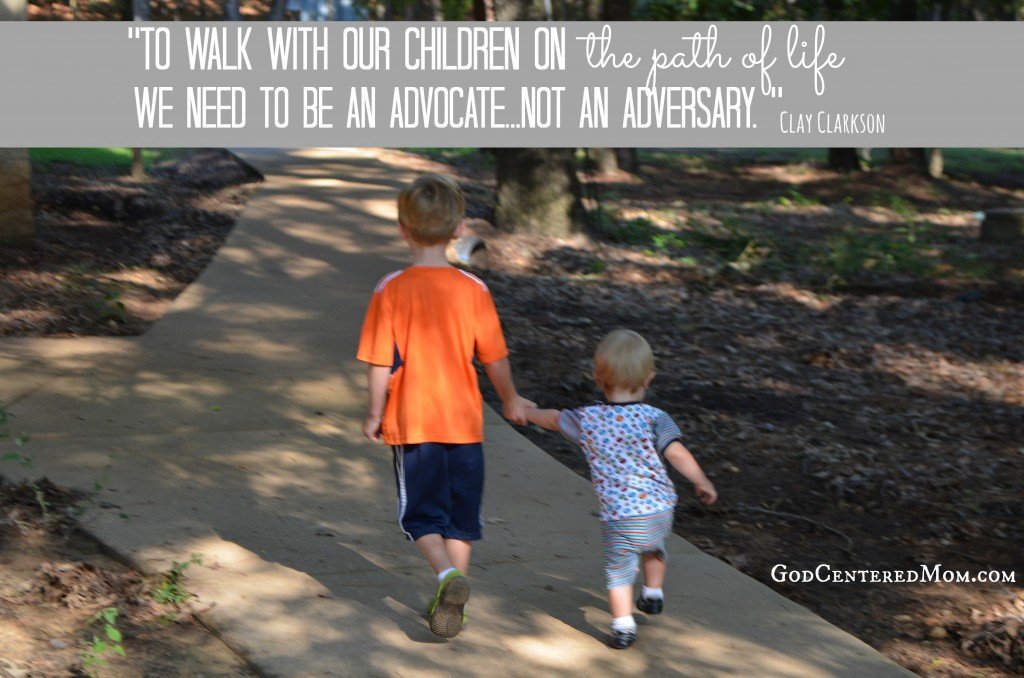 The reality is it’s harder to be an advocate. It’s challenging in the heat of a disciplinary moment to stop and consider how to benefit and disciple my son, long term. To think about whether the infraction was deliberate or inconvenient, takes time and patience. So much easier to quickly say, “Stop” or “Watts!” or “Don’t hit your brother!”.

God didn’t call us to be sin police; rather, He desires us to be wise and loving parents. He wants us to watch over what is going into our children’s hearts and to understand how those things are shaping the borders of their lives.We can be either an adversary or an advocate.  To walk with our children on the path of life, we need to be an advocate. -Clay Clarkson

I’m only just beginning his book and already I see changes in how I approach discipline in our home (by the way, Clay didn’t pay me to mention or review “Heartfelt Discipline”). I wanted to share what I’m learning and pray it would help you as you mother your little ones. Choosing to be an advocate instead of an adversary.

Do you struggle with being the “sin police” around your kids? If you don’t, help the rest of us…what tips do you have for being an advocate instead of an adversary?