On my flight back from Indy I sat behind the sweetest little family. The dad generously offered to sit next to their 5-year-old son. They patiently talked him through our one-hour-delay. They entertained him with educational games (“Can you find a picture in the magazine starting with the sound “tuh”?”). When he began to whine they quietly corrected and directed him.

Impressed, I wanted to congratulate the parents on a job well-done.

But I didn’t get a chance.

When we landed and they stood from their seats the mom realized her son had peed in his pants. Horrified she looked me straight in the eye and sarcastically said,  “Mother of the Year”.

I wanted to hold her two hands and say, “YES! Congratulations. You are the mother of the year. You just handled your son with grace, truth and love for a long airplane flight. You didn’t become unglued realizing you’d missed your connection flight and would be spending the night in a Dallas hotel.  I’d like to hand you an award because you are worthy of the honor, not the shame you just claimed.”

Instead I just smiled and said, “Y’all are doing a great job”.

Yesterday my son yelled from the bathroom, “Hey mom! You want to see the worms in my poop?”

Holding my nose I peered down into the toilet to confirm his claim. Sure enough a couple of little white strings started wiggling and I almost vomited on top of them.

This son (who shall go nameless for his protection) proceeded to tell me this was not the first time he’d seen worms in his poop. In his mind, he assumed this was normal. Again, WHAT?

I immediately googled, “little white worms in poop” (sure did) and discovered my son has pinworms. The suggested treatment involves medication, intense cleaning of the house, wiping his bottom each morning (since the female worms lay eggs at night…wish I was kidding), cutting his fingernails shorter, and washing his hands thoroughly after using the bathroom.

As I scrubbed his fingernails with a brush and anti-bacterial soap, he shared with me the names of his worm friends: “Dale”, “William”, “Bobby”, “Wayne” (Wayne is his favorite)…seriously.

My mind screamed, “MOTHER OF THE YEAR!!!”

Right? Don’t you think I’ve hit rock bottom when we are harvesting worms…in our bodies!

The shame washed over as the mothering doubts rolled in…had I not bathed him enough? Forced him to wash his hands after using the bathroom? Prohibited putting rocks in his mouth?

THEN I remembered the mom from the airplane. How she had thrown the proverbial “baby out with the bath water”. I was determined to keep that baby and lose the bad water.

So, here I am, mother of 4 boys (and many worms), proudly claiming:

I AM mother of the year! 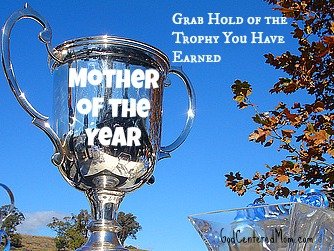 Perhaps it was poor hygiene that contributed to his worm “situation”. Beside the fact that I have four young boys whom I love well every day, I am doing a lot of things right. Here is the start of the list from that day:

I deserve it. You deserve it. But instead of grabbing hold of the trophy, you and I mock the award. We claim to be unworthy.

That is the farthest from the truth.

Just because a child pees his pants in public or has worms wiggling in his poop…doesn’t make you a bad mom. It doesn’t make him a bad kid either. It’s just life. One stinky thing happened in a long list of truly awesome things.

If you love your children and they feel safe today, then humbly accept the award for Mother of the Year (acceptance speech is optional…but you better thank your mother!).

What one thing went wrong today already and you claimed to be a “failure”? Make a list of all the wonderful things you have done right today (includes meeting basic needs). If today hasn’t been so good, consider yesterday, last week, this year…you deserve the award…so hold it by both handles high above your head! MOTHER OF THE YEAR!!!!

P.P.S. Just like anything I write about on this blog…I asked my boys’ permission in sharing their story. All 3 boys gave me the thumbs up (freshly trimmed thumbs too!).