Faith at a Fish Funeral

It was the lunchtime rush. Preparing food while tummies grumbled & mouths whined. I glance at the Betta fish tank sitting on our counter. Something seemed wrong. But I continued assembling sandwiches while comforting the newborn. Once the food was placed on the table and the boys were occupied I returned to check out Rojo Red (“the fish”). He wasn’t floating to the top, but he wasn’t moving. At. All. 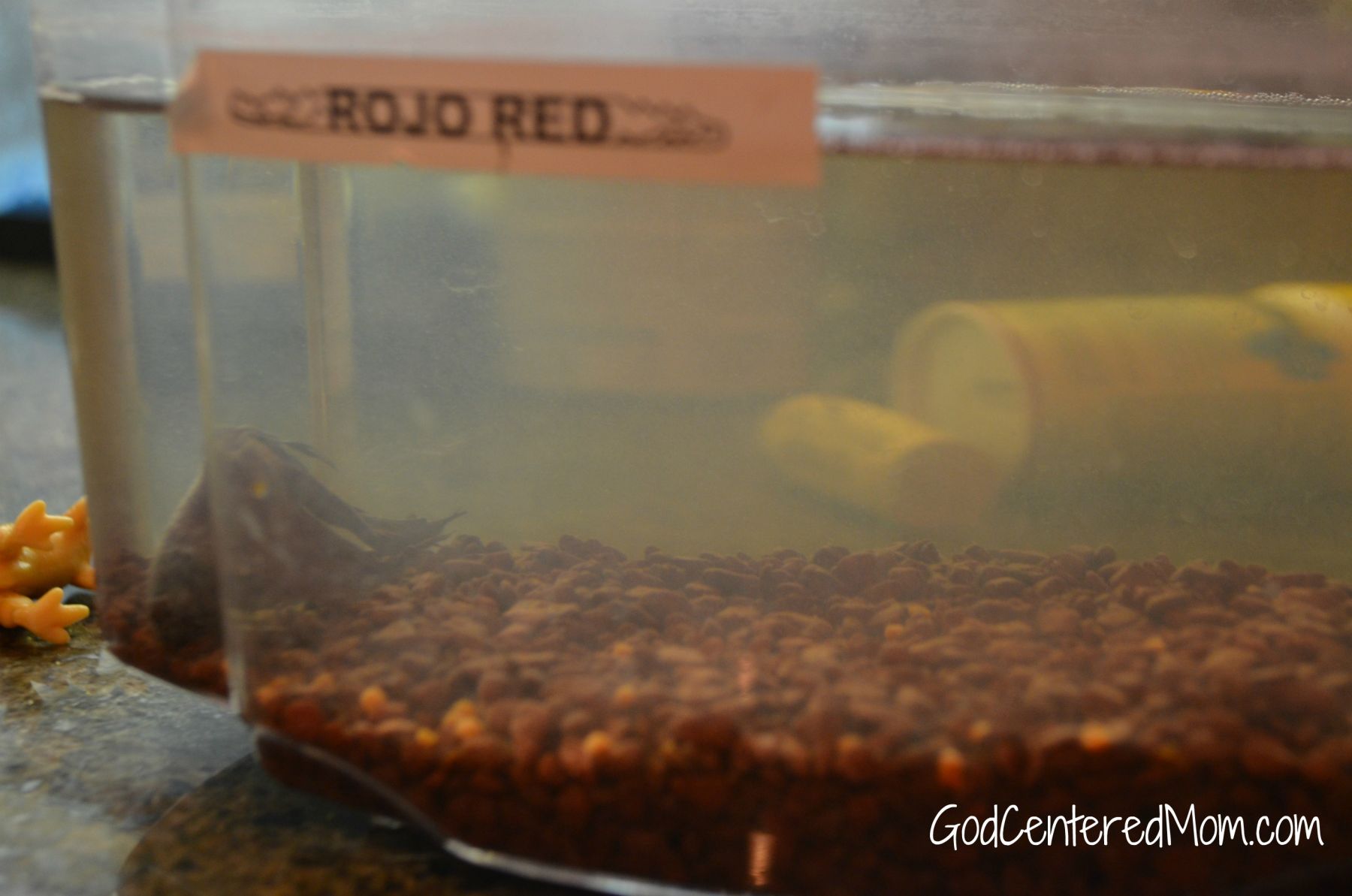 Upon further investigation I noticed the gray coating on his scales and the absent look in his eyes. I wasn’t 100% that he had left this earth…he had fooled us before (floated on his side for over an hour then made a full recovery). So I transferred him into a cup. His stiff body confirmed my assumption: our first pet death.

Rojo Red’s days were numbered. He was nearing his 2nd birthday and for a Betta Fish that is a long life (particularly a Betta fish whose owners have 4 young boys). 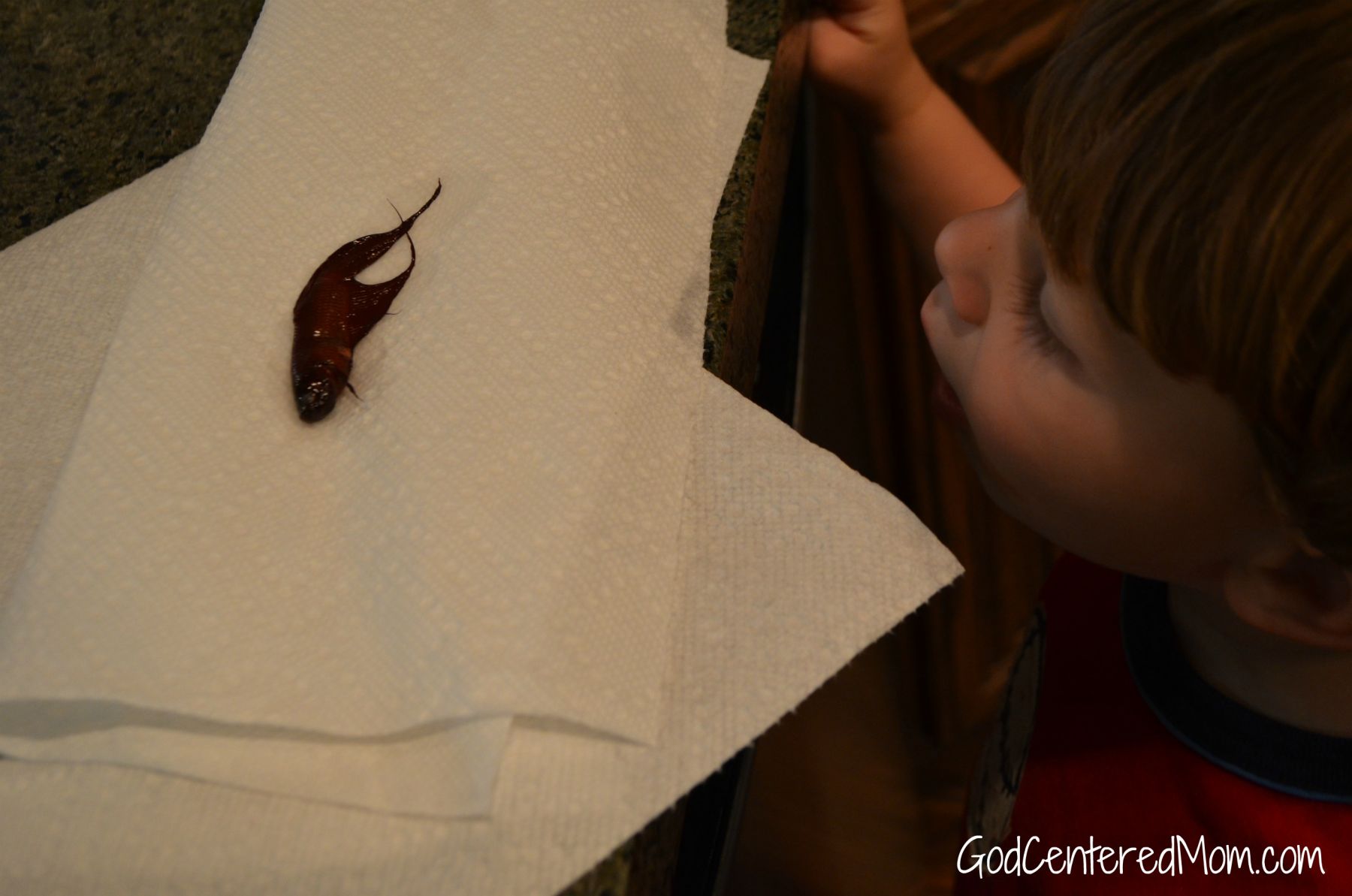 My middle sons were quite curious to check out the “corpse”. My eldest son (the most sensitive of the clan) hung back. Finally I convinced him it would be a good idea to see Rojo really was “gone”. 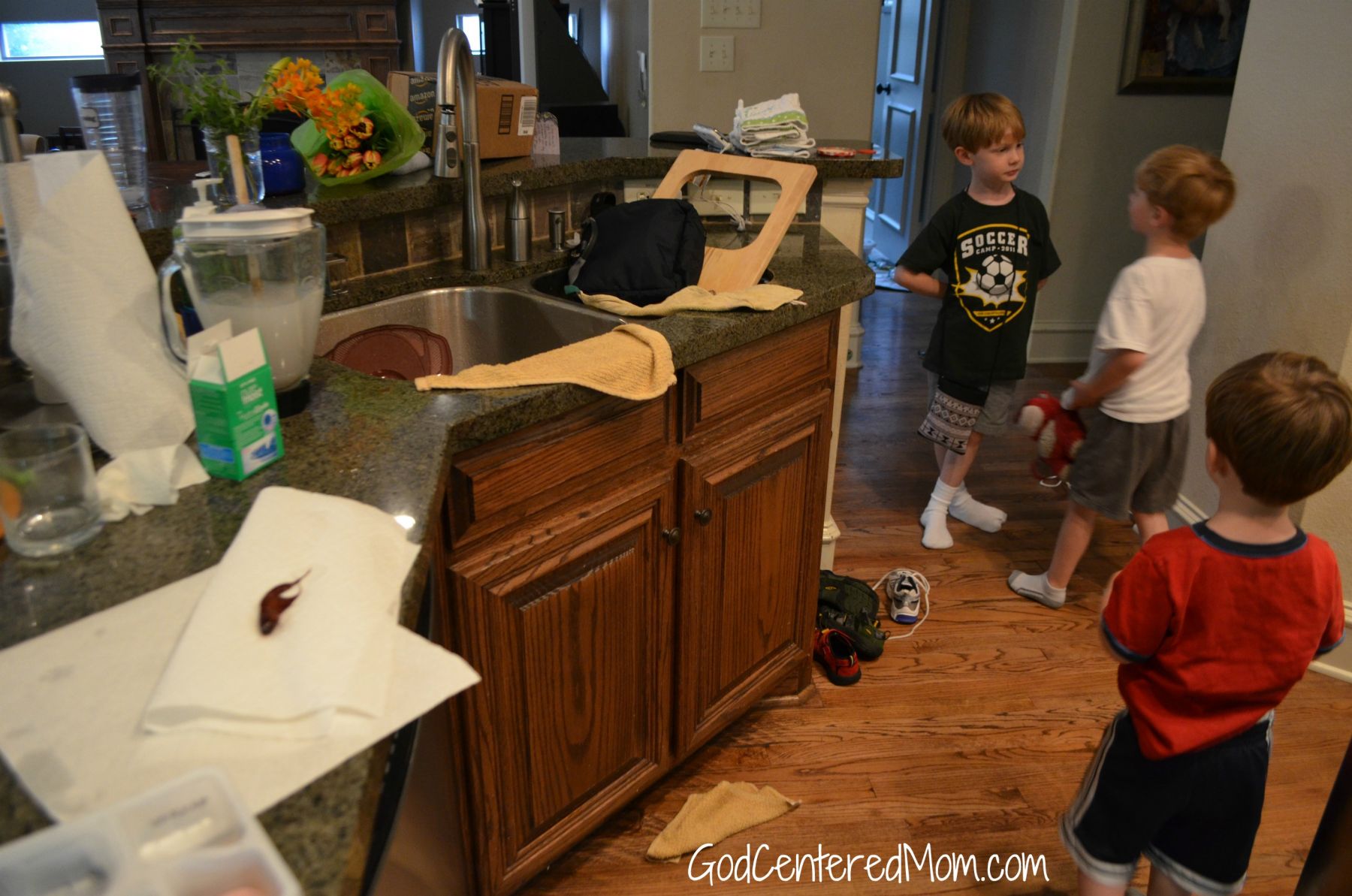 Nervously he stammered, “You know what cute thing some kids do? They bury their fish in the backyard. Can we do that?”. I responded: “We could do that. Or some people flush the fish down the toilet.”

Before the words were out of my mouth the two middle boys were chanting, “Toilet! Toilet! Let’s flush him down the toilet!!!”

The only way to calm them down was by saying, “Rojo Red was actually your brother’s fish from his 5th birthday. So he decides what happens to Rojo. If he wants to bury him, that’s what we’ll do.”

I prepared the body…wrapping him in paper towel. The coffin of choice was a small contact lens solution box (a free sample from my recent eye appointment…in my busyness I had let my prescription expire & ran out of contact lenses).

We headed outside. I grabbed gloves and a small shovel. My eldest found a piece of wood from a previous Taekwondo board breaking. He began to write down his sentiments… 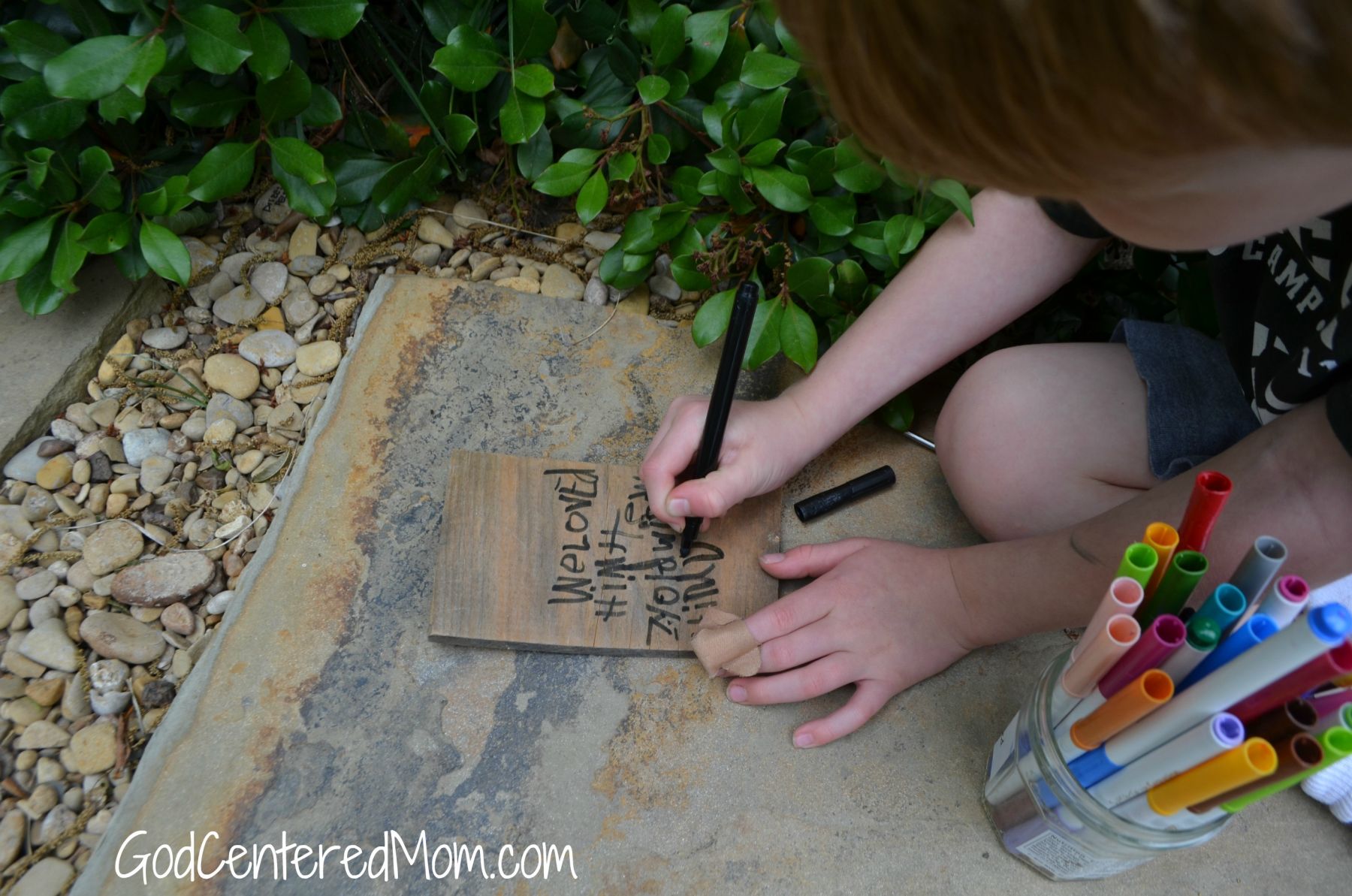 After the box was placed in its hole and gently covered with dirt, the eulogy began. I asked if anyone wanted to pray…silence. 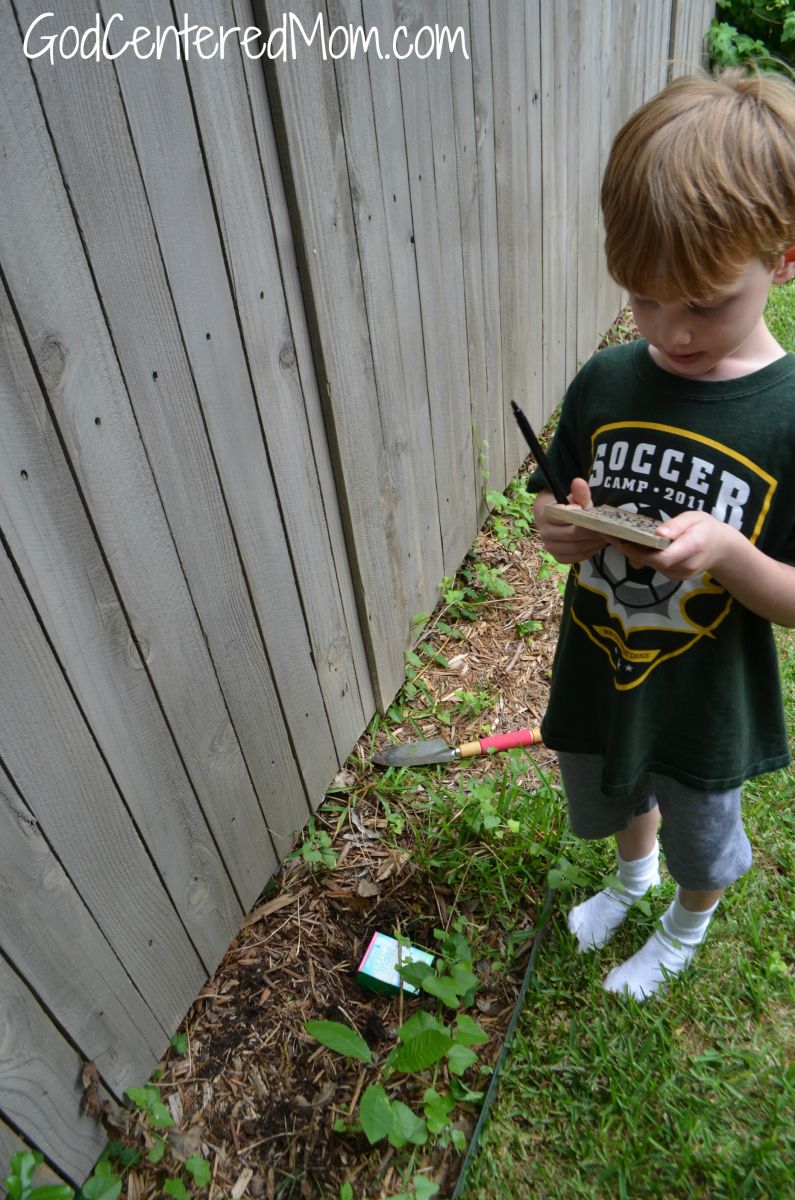 Then my 4-year-old closed his eyes & simply prayed:

“Dear Lord, thank you for our fish. Pray that he will come alive someday. Amen”

Paul wrote: “In prayer, with thanksgiving, present your requests to God…” On that day, I saw my son’s childlike faith. He demonstrated gratitude and made his request. A request that he wholeheartedly believed God could fulfill.

Until his older brother giggled and said, “Only Jesus can come back alive from death. Remember the Yancy song, ‘1,2,3, Jesus is Alive’. The fish won’t come back to life. Right, mom?” 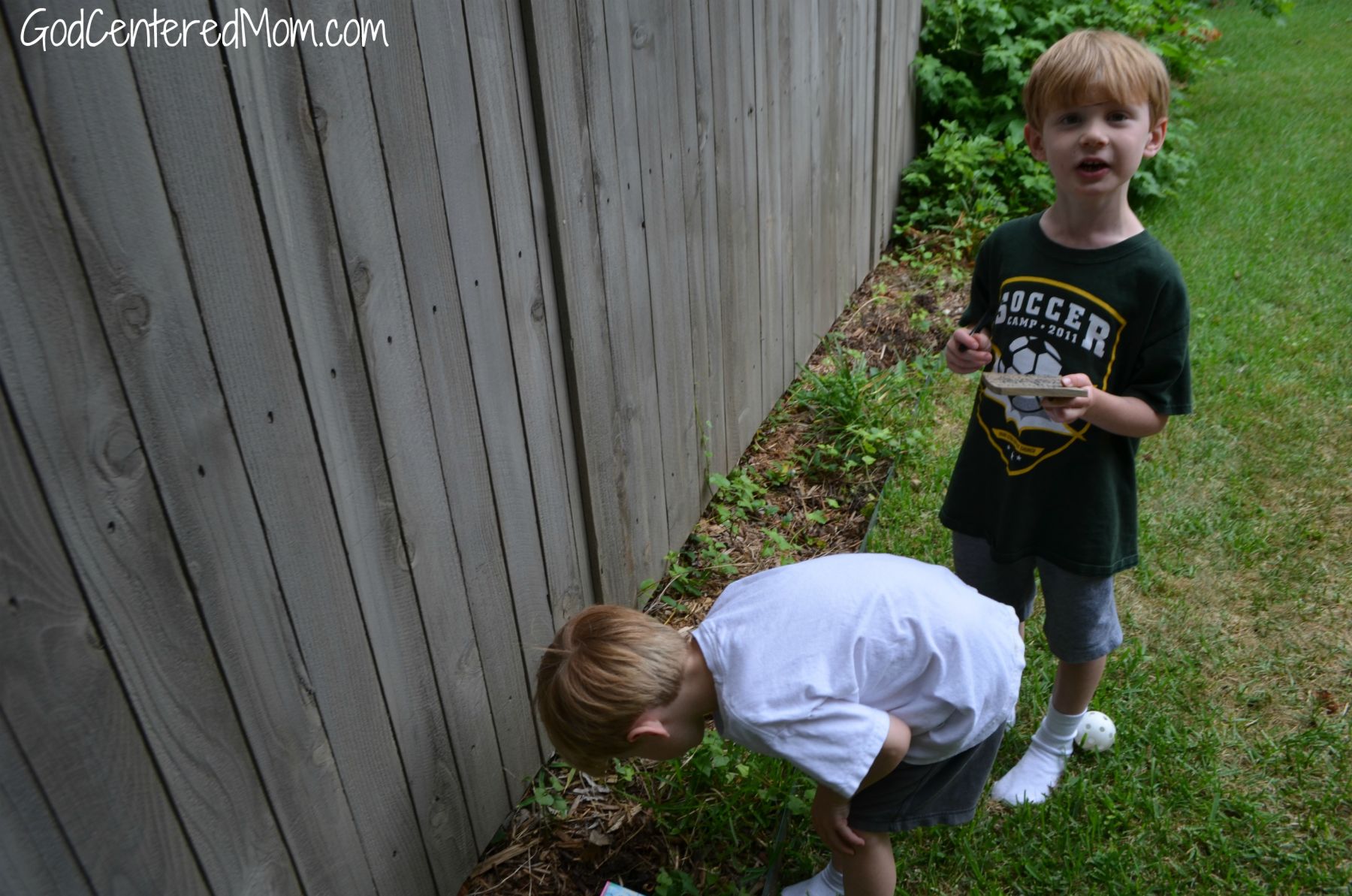 I wanted to believe that with God “all things are possible”.  However, my years of experience and science background, would not allow me to believe in a fish resurrection.

I watched my 4-year-old’s face transform from hopeful to enlightened. “Oh yeah, that’s true. He can’t come back to life.” I saw the change, the tiny step away from childish ways. When too much knowledge is a bad thing. When we stop believing in miracles. When faith is bound by science.

He said to them…” if you have faith like a grain of mustard seed, you will say to this mountain, ‘Move from here to there,’ and it will move, and nothing will be impossible for you.” Matthew 17:20

What struck me most is my lack of faith for this child. I was convinced he was averse to all things of God. Yet here he demonstrated pure faith. He believed God’s power could not be contained. He knew his heart’s desire could be innocently expressed to a big God who cared.

How often I say “I believe in God”, yet my actions communicate, “I don’t believe God”. If I truly believed God, then I would not worry about the future. My hands should be open to what He has for my family & my boys. Instead I strangle joy, white-knuckled out of fear.

The boy that I worried would not claim a faith of his own, demonstrated simple faith in a simple moment. His prayer was heard throughout the heavens. Although God may not bring Rojo Red back to life, God was glorified in the asking. 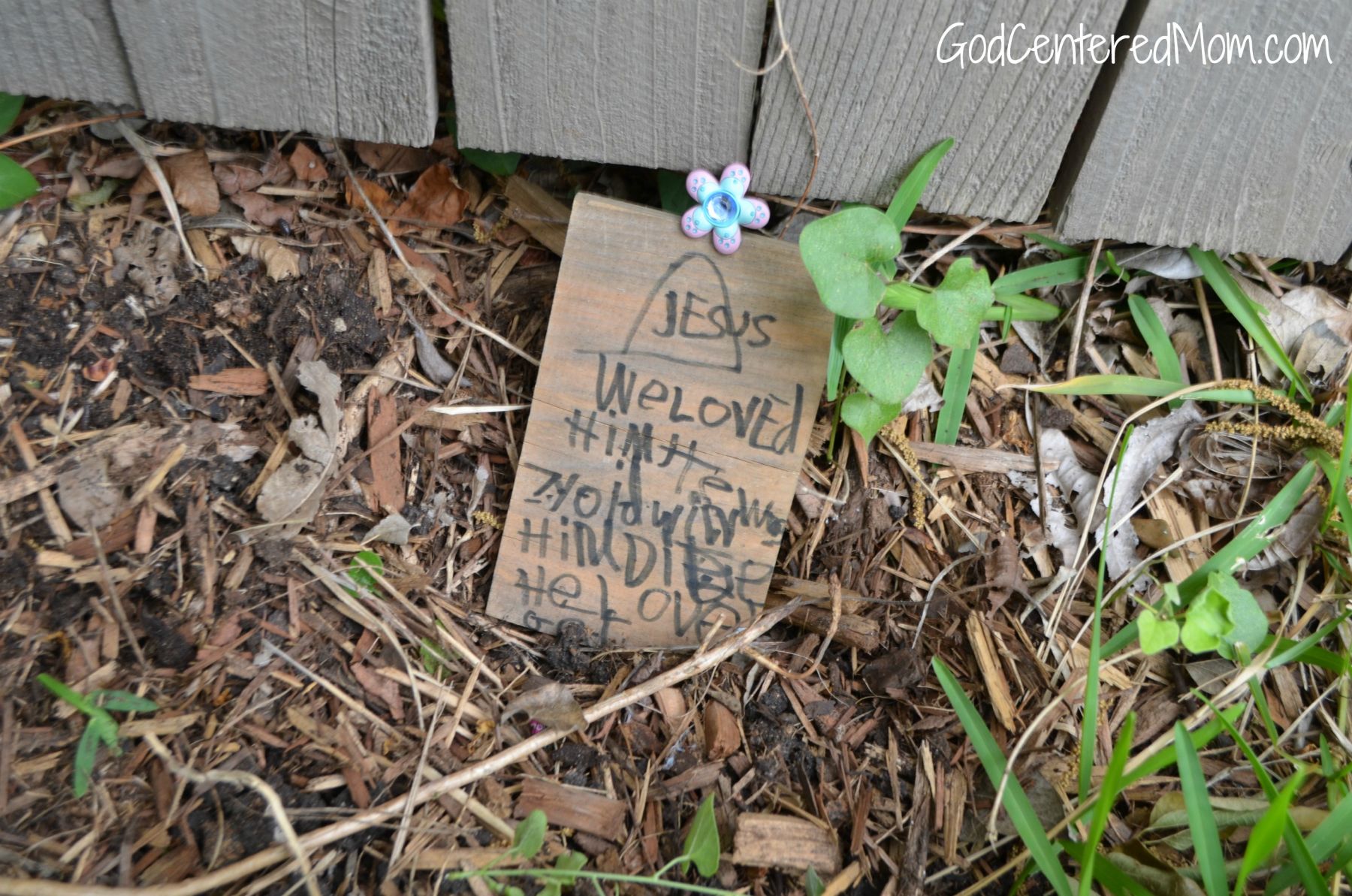 Jesus. We loved him. He was 7 years old when he died. He loved God.