I know taking my kids to McDonald’s is not consider the best parenting decision. However, at the end of the week, on a rainy morning, taking my boys to McDonald’s was the perfect parenting decision. Sometimes I have to ignore the “shoulds” and “should nots” and go with what I know is best for my family at that moment. By ignoring the world’s standards of a “green-living, organic” mom, we were blessed with some great life lessons, bonding, laughter & discoveries: 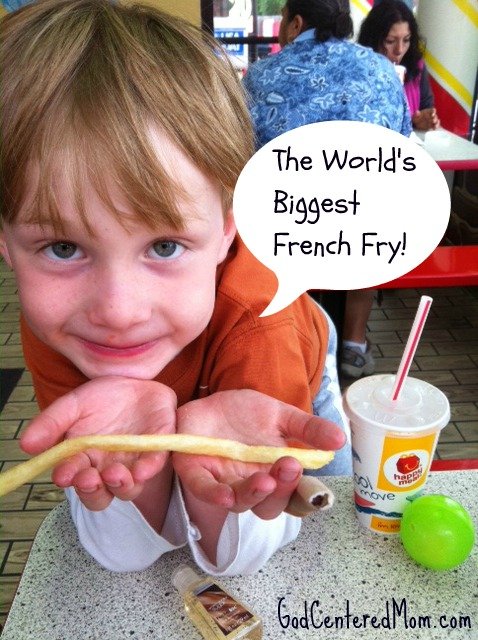 As I sat sipping my über large iced tea, my 4-year-old quickly ran by with a new friend  close behind him. Each boy flying their plastic green lantern superheroes. With a huge smile on his face, my son yelled out: “We’re friends because we have the same toy!”

It’s that simple. My son didn’t care how old his friend was, where he lived, if he knew Jesus as his Savior, what denomination he was or that he had different colored skin. He only cared that they shared a similarity: a free toy from McDonald’s. Later we talked about how great it is to make new friends, even if they have different colored hair, shirt, eyes or skin.

Instead of releasing my “mama bear” to teach another child a lesson, I used the opportunity to instruct my boys…

Me: “What do you think of the “not nice boy’s” heart based on how he acted?”

My four-year-old quickly replied, “He probably has a bad heart, not a good heart.”

My six-year-old argued, “But we all have bad hearts. We all make made bad choices.”

Me: “You are both right. When we act badly, others see that our hearts are bad.”

“Even a child makes himself known by his acts, by whether his conduct is pure and upright.” Proverbs 20:11

Me: “But Christ came to cleanse us and to give us pure hearts. We are still going to make bad choices, but we have been given the power to make the right choice. We can show other’s Christ’s heart. Imagine if you are kind to your brothers and you work together. Would others call you the ‘not nice boys’ or the ‘nice boys’? Would others think you have kind hearts or unkind hearts? Would others see Christ in you?”

Despite my recent attempts to “say less, pray more”, I still find myself giving the boys unnecessary warnings. In this case: “Be careful not to let your toy roll under the slide, we won’t be able to reach it.” Upon hearing this, my youngest son took it on as a challenge.  Very quickly after my warning, he managed to lose his toy, just out-of-reach, behind a gate. 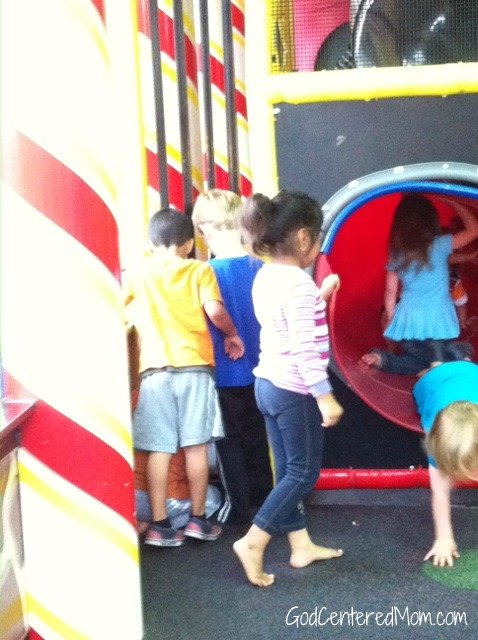 Since I had warned him of what would happen, I felt little sympathy. However, his brothers exhibited kindness towards him. Losing a toy is monumental in their minds. They plotted and schemed on how to retrieve the toy for their little brother (so maybe my lesson on kindness was sinking in! Miraculous!).

I offered a solution: “Go get me 5 straws.” This is what we created…the world’s biggest straw: 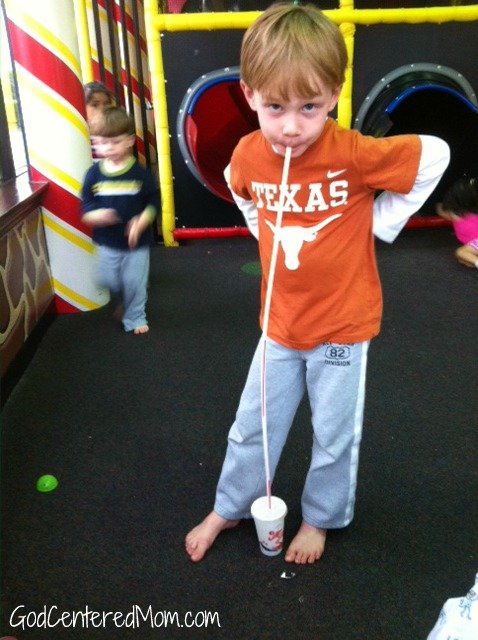 Those sweet brothers worked together, using the world’s biggest straw to reclaim the lost toy. They drew an audience. More than anything, love took action in a simple gesture.

“Dear children, let us not love with words or tongue but with actions and in truth.” 1 John 3:18

At the end of the week, on a rainy morning, even at McDonald’s, miracles can happen. New friendships can be made from the simplest of commonalities. Hearts can be reached. Brothers can serve one another. Lessons can be learned while sipping ice tea and eating giant french fries.