Yesterday I had the opportunity to attend the screening of the docudrama of Josh McDowell’s early years, entitled “Undaunted”. This weekend also included the anniversary celebration of Josh’s 50 years in ministry.

Josh started by serving with Campus Crusade for Christ (now known as “Cru”) in 1961. In 1964 he launched the Josh McDowell ministry and has since written 127 different books. In 50 years he has delivered more than 24,000 talks to over ten million young people and their families in 125 countries.

Pretty amazing right? You would think that he had quite the Biblical heritage to do such amazing things for God. His parents must have done everything right & taught him scripture at a young age. However, nothing could be farther from the truth…

Did you know that Josh was raised on a farm with an alcoholic father who physically abused his mother. He was sexually abused from the ages of 6 to 13 by a man who worked on their farm. His older sister committed suicide.

Just like only our God can do, He transformed beauty from ashes…

Josh began his faith journey by trying to disprove Christianity. He even went as far as traveling to Europe, reading original manuscripts and other skeptic authors just to prove the fallacy of the resurrection. At the end of his research he discovered, in his own words, that “it was true”. He began to attend church and through relationship with the pastor and support of friends He began to follow Christ.

Through mentoring he felt that in obedience he needed to tell his father he loved him (even if he didn’t feel it) and he needed to forgive his abuser (following Christ’s example on the cross…”forgive them Father for they know not what they do”).

Josh was in a terrible car accident during college and was required to go back to the home that brought him pain & shame, to be in bed recovering from a back injury that left him strapped to a board. It was during this time that he was able to share Christ with his father. His father’s salvation led several others in their small community to faith. Just a year and a half later his father passed away.

If Josh had not been in that accident, he may not have had the opportunity for full forgiveness and reconciliation with his father…freeing him to serve others for 50 years!

A turning point for Josh came after a chapel service he attended at Wheaton College. The speaker was calling them to use their gifts and talents for God’s glory.

The problem was that Josh felt he had no gifts or talents to give. All he had was a history of brokenness and failures. In a moment with the Lord He said, “I only have weakness. But I will give all my failures to you to bring you Glory. Every breath I breathe will be to serve you Lord.” 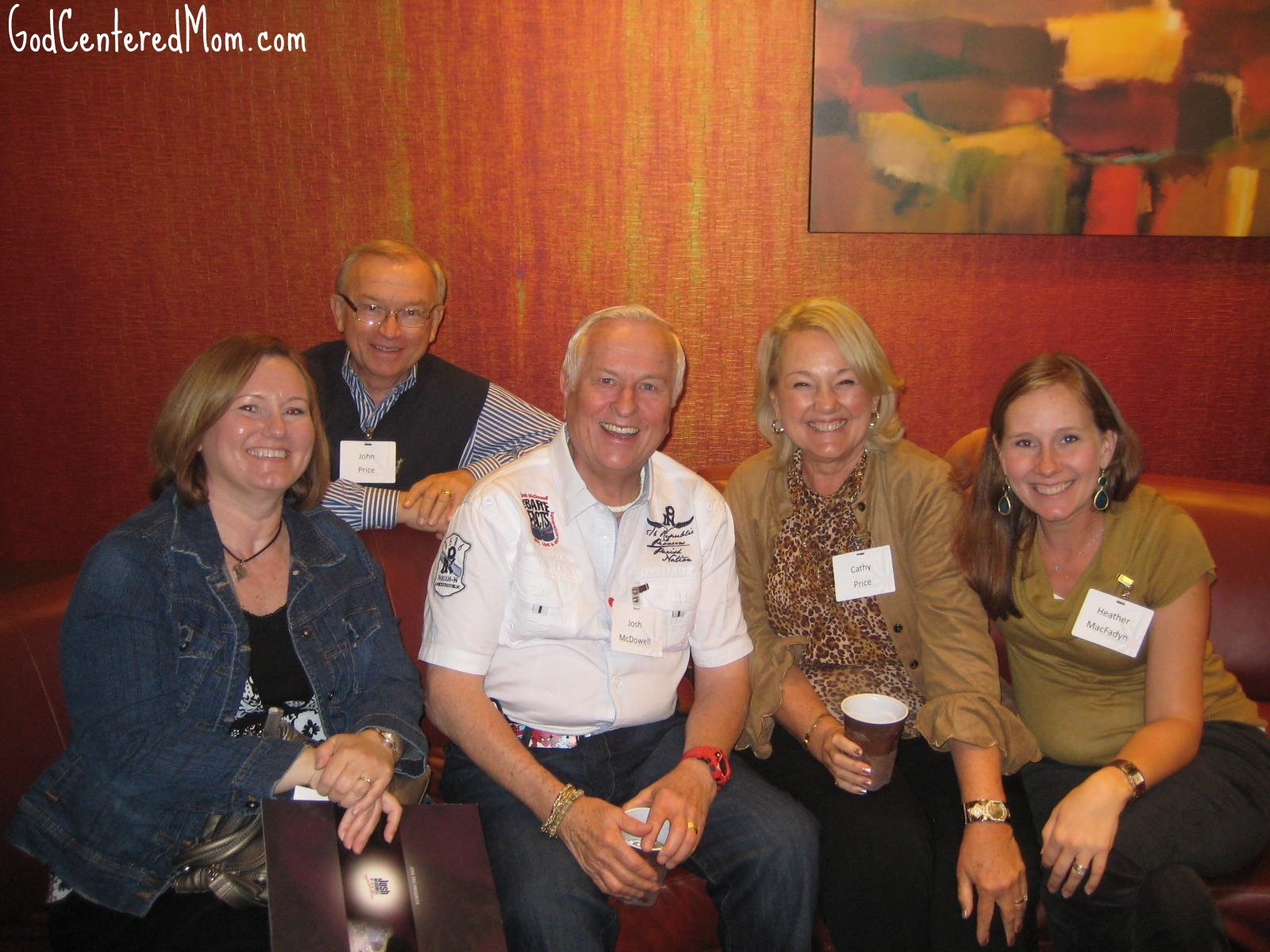 (From L to R: My sister Andrea, My dad John, Josh McDowell, My mom Cathy, and Me)

Josh is a dynamic persona. He is full of life and compassion. Here are some quotes he shared on Saturday that I loved:

“It’s all about relationship not religion. Prayer is more about the attitude of the heart, not the position of the body.”

“One person can make a difference but you have to be different” (not just in the way he lives but also in the way he dresses…a third button on his shirts that is red, a fun belt collection, funky shoes).

He prays: “Lord make me be a blessing for someone today.”

“I am overwhelmed by the idea that if I was the only person on the planet God would have sent His son to this earth to save me. God who created the universe wants to spend eternity with me.”

You may feel that you don’t have any gifts or talents to use for God’s glory. I want to encourage you that God created you special. Your experiences and failures are unique to you and God can use ANYTHING for His glory. He just asks that you give it all for Him.

“But he said to me, ‘My grace is sufficient for you, for my power is made perfect in weakness.’ Therefore I will boast all the more gladly about my weaknesses, so that Christ’s power may rest on me.” 2 Corinthians 12:9

*If you are interested in knowing more about “Undaunted” or Josh’s other ministries, go to www.Josh.org