This is the one that God chose to knit together in my womb (Ps 139). He chose this child to be my 4th. We have been blessed with a healthy baby… 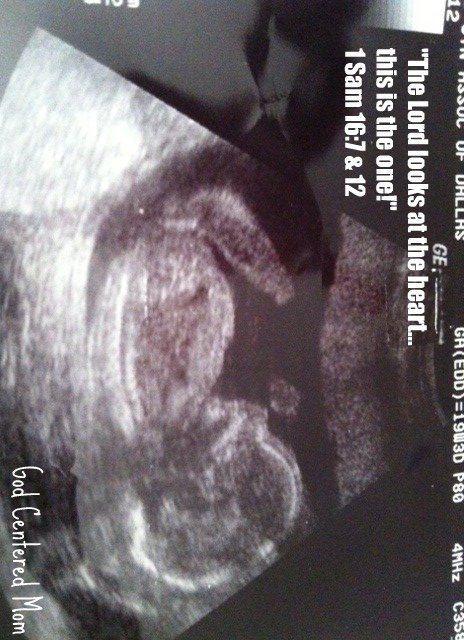 Because of my little gender prediction test results I’ve been able to process my feelings regarding the potential fourth boy. Due to the advice of one reader (Liberty from http://www.youngmightymenofgod.blogspot.com/) I sought God for a vision for this child.

My boys have been really curious & interested in knowing everything about David in the Bible.  Through reading out of every children’s and adult Bible we have I was giving my vision for this fourth child if it was a boy…coming from when Samuel is told by God to find a replacement for King Saul:

“There is still the youngest,” Jesse answered. “He is tending the sheep.”

Samuel said, “Send for him; we will not sit down until he arrives.”

12So he sent for him and had him brought in. He was glowing with health and had a fine appearance and handsome features.

David was not the 1st, 2nd, 3rd or even 4th son. He was the youngest son with at least 7 older brothers. He was chosen by the Lord to be king. He was the one. He was a man after God’s own heart.

My prayer and vision for this child is that he would stand out among his brothers (who are already amazing!) and he would serve God faithfully & be a man after God’s own heart.

(Thank you already to all my sweet friends & family who have reminded me this morning of God’s faithfulness & blessing. I am honored and humbled to have so many wonderful godly friendships in my life.)