This past Sunday I had the privilege of hearing Tony Hale speak about his life story and his views on how faith intermingles with art/acting/hollywood. 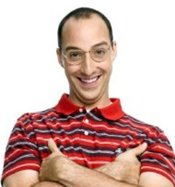 Here are 10 truths he spoke that night:

1) Liza Minneli is a gracious woman: In case you haven’t watched the hilariously written TV series “Arrested Development”…Tony’s character Buster dates a woman played by the famous Liza Minneli. Tony shared how wonderful a person she was. He also told us about how she rode with he & his wife to church in his Chevy Malibu. She sat in the backseat chain-smoking and belted out “Liza with a z.” After church they went to lunch and Liza shared precious memories of growing up as Judy Garland’s daughter. He also observed how isolating her fame was…people not giving eye contact, talking about her but not to her, like she was in a glass box.

2) Fans of celebrities want the “character” not the reality of that human being. When fans see “famous people” in real life they sometimes reveal disappointment in their faces…that can unknowingly greatly affect a celebrity’s sense of worth and self-esteem.

3) As Christians we often demonize Hollywood…forgetting that we are ALL a mess! He also shared how at Hollywood parties those present are unwilling to reveal their “mess”. All pretending they are fine and dandy…positioning themselves for their next “gig”. (Don’t we pretend the same thing at church? I want to shout it out: “I am a mess in need of a Savior!”)

4) Don’t judge a character (or a person)…he learned that sometimes what he doesn’t “like” in a character is often inside himself. Same is true with people. If you are judging others actions or personality, it may be that the reason you feel so strongly is that it is present in your own heart.

5) As Christians we each have value…don’t need to claim actors who are Christians just to give us value. God gave each of us value in ourselves. Fame does not make us more valuable.

6) If Tony says “yes” to a role that he doesn’t feel 100% comfortable with then he is doing the people who are hiring him a disservice…he will then not be giving them 100% of himself.

7) If you don’t like something (in a script or whatever) don’t just shoot it down. Give other options. Solutions.

8 ) What is “Christian Art”? Is a cross or a tree more “Christian”? (Do things have to be labeled “Christian” to be honoring Christ? Can we glorify Him in “secular” art?)

9) Artists who are believers are often unsupported by their families or their church and carry a lot of shame…Tony started a ministry for these artists called “The Haven”. They practice the act of gratitude in the midst of a lot of rejection…to help them turn their thoughts more outward than inward. They also serve in NYC to the homeless, etc

10) Practice contentment in every part of your life…NOW! Be content in the “now”. If you are waiting to be content in the next thing you will be greatly disappointed when you arrive there. Find fulfillment in what God has given you…now. (sounds like he would love “one thousand gifts” by Ann Voskamp!).

Be content in the “now” of your day. Enjoy what God has given you today!

*During the Q&A time, one little girl asked Tony his favorite verse. Here it is:
“But blessed is the one who trusts in the Lord,
whose confidence is in him. They will be like a tree planted by the water
that sends out its roots by the stream.
It does not fear when heat comes;
its leaves are always green.
It has no worries in a year of drought
and never fails to bear fruit.” (Jeremiah 17:7, 8 NIV)