Dwelling of the Lord

I mentioned in my Few Favorites Friday post that I was given the opportunity to guest post on the “Do Not Depart” blog. I feel that this message was given to me by the Holy Spirit and I don’t want you to miss it. So I’m posting half of it on my blog and the entire post is on the Do Not Depart site (since they asked me to write it for them). My prayer is that you hear God’s message for our lives through the mistakes made by Solomon.

David, a man after God’s own heart and a man of war, was not going to be the man to build the First Temple. That task was given to his son Solomon. However, David drew up the plans.  He said, “Solomon my son is young and inexperienced, and the house that is to be built for the LORD must be exceedingly magnificent, of fame and glory throughout all lands; I will therefore make preparation for it.”  David understood the importance of building a dwelling place for the Lord. He dedicated the end of his life to gathering a great quantity of building materials for the Temple. 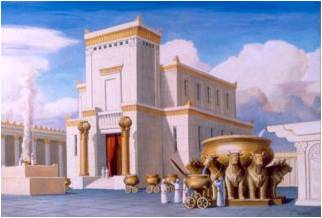 The building of the First Temple was a monumental task. It was built by 30,000 Israelites; 150,000 Canaanites & even Phoenician artists. Construction began in the fourth year of Solomon’s reign and took seven years (specifics from L. Dolphin).

After reading about the details of the Temple in 1 Kings 6, we learn in the next chapter that it took 13 years to build Solomon’s personal palace.

Did you catch it? I almost missed it the first time I read it.

Solomon spent twice as long building his own palace then he spent building the dwelling of the Lord. He used twice as much of his time, energy, & resources for HIMSELF than he did for His Lord….

***To read the rest of this post and to see the application to our own lives click on this link: http://donotdepart.com/dwelling-of-the-lord-guest-post