Boys and Aggression: What’s a mom to do?

My post on my boys and their tendency to harm others and it’s humbling effects  spurred some great discussion and questions among my mommy friends. I thought I would continue the conversation on my blog.

Here are variety of situations in which my boys may hurt someone else and how I would handle each situation…to the best of my ability. May you be encouraged to know that I have experienced the embarrassment of my children hurting other children on many occasions and in many locations. You are not alone! 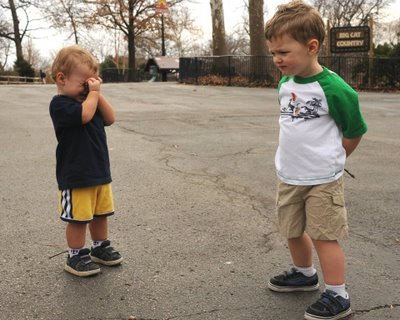 The boy in our family most likely to hurt a stranger is my youngest son (the 2 yr old).  He has the least inhibition, the least amount of “training”, least ability to communicate and is developmentally in an aggressive stage.  The older two at this point understand that you don’t hit, push, or hurt kids you don’t know. My youngest sees every child as an equal opportunity victim. If I see him hurt someone, then I will use the opportunity to train by:

Because I have 3 children and/or may be in a conversation with another mom, I may not see every instance when my son hurts another. Most likely the injured child will either tell me, “your baby hit me” or I will hear the crying child and see them point at my son (that’s one of my favorites…not!).  I prefer to discipline only when I have seen my child make a wrong choice.

However, in those situations where I did not see the assault but the accuser looks trustworthy and my child looks guilty, I remove my child from that area and again have him take a break. I may even ask him if he hurt the child. If he says, “yes”, then I will have him go apologize and work it out.

Situation #2:  Your child hurts his brother or a friend’s child in public. 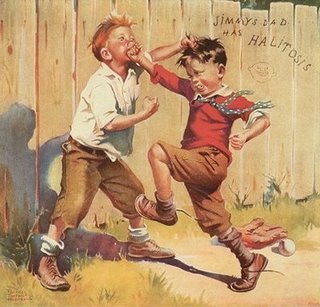 I feel that when we are out in a public place all acts of aggression need to be addressed as best as possible (same steps as mentioned above).  When we are at home and it is just my boys, we have plenty of opportunities to learn how to treat others, how to apologize, and make mistakes.  If appropriate training occurs at home then the test is when we are in public.  (Training at home can also include reading books like “Hands are not for hitting” or create your own social stories of appropriate behavior).

My older boys know how they are supposed to behave when they are in public. The level of self control needs to be raised.  They know those are not the times to lash out at your sibling. Because I have these higher standards, I try not to have them out in public for an entire day. That’s too much to require of a little boy with hormones flowing.

Situation #3: Your child hurts a friend at a playdate. 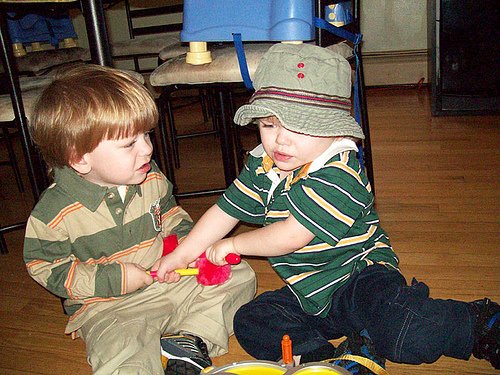 The boys that my boys play with have been lifetime friends. Their moms are my friends. We have been friends since our boys were first born. Therefore, when we have friends over to play it’s like having extended family over. There are still expectations: no hitting, no biting, sharing toys, and speaking kind words. My friends have taught their children the same thing.

When we are together I don’t want to have to micromanage every interaction between my sons and their children. I want to give my sons an ability to learn from natural consequences that if he treats his friends poorly they will not want to play with him. That’s the best part about playdates…a confined period of time, with good friends, to learn social and play skills.

I can tell when one of my sons is not himself during a playdate. If he is being overly aggressive, unreasonable, purposefully inconsiderate, then I will have him spend some time in his room until he is ready to play well with his friends. But in general, I like to allow them to work out most play interactions. If a friend tries to talk to me about a frustration, I respond with, “have you talked to ______ about it yet? why don’t you tell him how you feel?”. It is how we are commanded to handle conflict Biblically, so we might as well enforce it when they are young.

We were at a community pool and my oldest son (almost 6 yrs old) and his best friend (calls him his “brother”) were having a battle with pool noodles. His mother and I agreed that we would let them battle. They were playing well together, having fun being boys and they weren’t hurting anyone else at the pool (off to the side). However, the battle escalated, they entered the pool and they each went too far.  Leading to tears on both sides. Each mom took her son to let them cool down. We gave them their space and after awhile they talked it over, apologized and were already scheduling their next play date. Success!

How do you handle fights between your child and another child? What strategies do you use? Any good resources to share?

* I have so many more things I want to say on this topic. may need to turn it into a series! Next installment: Giving boys words to use.