From the smallest tribe, the first king of Israel was anointed: King Saul.

Saul answered, “But am I not a Benjamite, from the smallest tribe of Israel, and is not my clan the least of all the clans of the tribe of Benjamin? Why do you say such a thing to me?” (1 Samuel 9:21)

Once Samuel anointed Saul king, Samuel heard the “voice of the words of the Lord”(1 Samuel 15:1). The Lord’s command to King Saul was clear: “utterly destroy the Amalekites”. 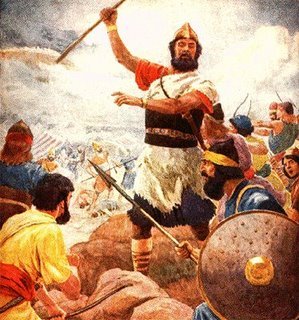 Here was Saul’s chance to obey the Lord. He was chosen by God from the least (smallest tribe of Israel) to be the most powerful man of Israel.  His power came from the Lord.

Unfortunately, Saul allowed pride to inhibit obedience.  His pride even blinded him to the fact that he did not fully God’s command.

“He captured Agag, the king of the Amalekites alive…but Saul spared Agag and the best of the sheep, the oxen, the fatlings, the lambs, all that was good, and were not willing to destroy them utterly; but everything despised and worthless, that they utterly destroyed.”                            (1 Samuel 15:9)

Saul took matters into his own hands. He decided whom he thought should be killed. He made his own categories: worthy & unworthy. The worthy he spared, the unworthy he utterly destroyed. God had one category: utterly destroy it all.  After Saul disobeyed the Lord, Samuel received another word from the Lord:

“I regret that I have made Saul king, for he has turned back from following Me and has not carried out My word.” (1 Samuel 15:11)

Saul’s self-centeredness and pride led to disobedience and a removal of God’s blessing from his kingship.  You would think Saul would be humbled by the Lord’s regret. Unfortunately, Saul was oblivious. When Samuel finally caught up with Saul to give him the Lord’s message, he discovered that Saul had even built himself a monument! 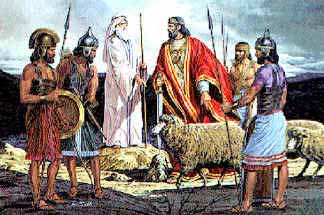 His delusion continued…Saul greeted Samuel by saying, “I have carried out the word of the LORD.” And Samuel responded by questioning Saul on why he heard sounds of sheep and oxen. If Saul had obeyed the Lord, then there would be no animals. Saul then transfers the responsibility on others…continues to think only about himself:

Samuel didn’t allow Saul to avoid blame. He called him out: “the Lord anointed you king over Israel”, “the Lord sent you on a mission”, “why then did you not hear the voice of the Lord” and “you did what was evil in the eyes of the Lord”. 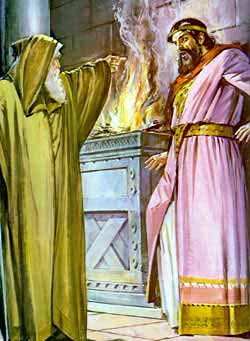 Saul still didn’t listen to truth and continue to claim it was “the people” who took the spoils but that it was for a good cause…sacrifice to the Lord your God (still not claiming God as his own).

“Has the LORD as much delight in burnt offerings and sacrifices, as in hearing the voice of the LORD?  Behold, to hear is better than sacrifice, and to heed than the fat of rams.” (1 Samuel 15:22)

Saul mistakenly thought that he could impress God with sacrifice. That rituals are what God desires. We do that don’t we? We think “works” & “disciplines” will obtain God’s blessing. We learn from Samuel that God is interested in us listening to His voice. To obeying Him. To humbling ourselves and serving God wholeheartedly.

“For rebellion is as the sin of divination, and insubordination is as iniquity and idolatry. Because you have rejected the word of the LORD, He has also rejected you from being king.” (1 Samuel 15:23)

BUT immediately after admitting that he put people’s opinion above God’s, he asked Samuel to go before the elders and Israel and honor him. What? Didn’t he just admit he sinned? That he had cared to much what people thought? Then he wanted more honor from people? True honor only comes from the Lord. “Those who honor me, I will honor.” (1 Samuel 2:30)

Unfortunately King Saul was not humbled. He did NOT put God center in his life. The result was that God’s kingship blessing was removed…”Samuel grieved over Saul and the Lord regretted that He had made Saul king over Israel” (vs 35).

Did you hear the whisper?  Is your pride leading to sins of: disobedience, self-centeredness, lying, people pleasing? Most importantly…whose voice are you listening to? God’s or others?

* This post is again inspired by the preaching of Abe Kuruvilla .